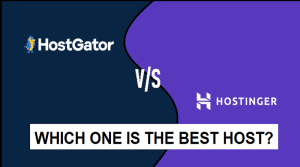 HostGator is one of the biggest hosting providers in the world and it offers hosting plans starting from $2.75 per month.

Hostinger is used by over 29 million users worldwide and its pricing plans start only at ₹62.10/mo OR $1.79/mo (use coupon BLACKFRIDAY).

If you’re looking for a detailed comparison of these two popular web hosts, read this post.

Looking for an honest comparison of HostGator vs Hostinger 2023? You’re in the right place

In today’s comparison of HostGator and Hostinger, we will share our deep study covering all major aspects including speed, performance, uptime, customer support, pros & cons, pricing, and more.

Without any delay, let’s get started.

HostGator vs Hostinger 2023: A Quick Comparison Table with Verdict

Verdict: Hostgator vs Hostinger 2023: Who is the Winner?

Hostinger is the real winner – After comparing various parameters of Hostinger and HostGator It has been found that Hostinger offers more real value to users – in terms of money, list of features, efficient free backup facility,  a vast network of servers across the globe, and overall performance.

In a nutshell, one should definitely go for Hostinger when affordable pricing and higher speed are a priority. However, if you’re looking for the best customer support, free domain benefit in a starter plan, and unmetered storage then HostGator should be considered

HostGator vs Hostinger: Who Wins The Pricing Battle

Quick Note: The pricing mentioned below will only be applicable when you use our special discount link.

Here is the breakdown of Hostinger Plans:

Save up to 90% on Hostinger Products [Use our Hostinger coupon: BLACKFRIDAY] – For Special Black Friday Pricing

You can easily start with any of its plans like Shared hosting, VPS, and Cloud as all of them are available at affordable rates. Depending upon the features and requirements, you can pick the one which is suitable for your project.

Important: This November, Hostinger has released its Black Friday sale [up to 90% off]. We recommend the premium shared hosting deal which starts from ₹116.10/mo OR $2.24/mo.

The premium plan is almost equal to the single shared plan (₹62.10/mo OR $1.79) and offers additional perks including: A free domain name, additional storage, and 100 websites support.

Hostinger is known for affordable rates especially in shared hosting services, making it possible to go online spending just $1.79 OR INR 62.10 per month (our special pricing – accessible through the above button).

Here is the breakdown of HostGator Plans:

HostGator.com offers you the Shared hosting plan at $2.75 per month. Still, if you compare $1.80 with $2.75, Hostinger’s offerings sound more pocket friendly.

Get Upto 60% Off on HostGator Now

Here is a glimpse of HostGator’s hosting options along with starting price.

Read: HostGator Coupons India 2023: Get 50% Off Plus Free Domain

Page load speed is the critical ranking factor. Google’s core web vitals if followed, ensure the user experience of your site and hence will be the key ranking factor in 2023.

While both web hosts are optimized for faster page load, it is still important to find the best out of the two.

Here is the uptime and response time of Hostinger recorded in the last 30 days.

The average speed of Hostinger is exceptionally well (608 MS).

Uptime is directly related to the number of hours your site is down or unavailable to visitors.

As per the test analysis, the HostGator uptime is remarkably good. However, the speed (response time 1250 MS) is slightly more than Hostinger’s. Sometimes, even a small margin can make it or break it.

Hostinger vs HostGator: Any Features Difference

We always recommend a host where the pricing and list of features are user-friendly with a minimum scope of any up-sell by the company.

Once a purchase is made, it should have all the necessary features and you shouldn’t be asked to pay extra for any of them.

Who is best if Extra Features is your priority?

HostGator offers a Free domain with its basic plan but the pricing starts from $2.75. Hostinger, on the other hand, is the cheapest hosting at just $1.79 but the Free domain is not there in the basic plan [available in all other plans].

Talking about Bandwidth and Storage, while it’s capped in Hostinger’s most of the plan, HostGator provides unlimited use of storage and no cap on data transfer.

Don’t worry. It is actually not that tough to understand the plans the features are mostly driven by the marketing strategy of the company.

Now the Crux: Even if the bandwidth and storage are unmetered in HostGator’s entry-level plan, it is almost 2.5x the cost. Hostinger’s “Premium” and “Business” plans come with more than the required storage and unlimited bandwidth.

Easy backups and multiple server locations are the edges that Hostinger has above HostGator at much cheaper rates.

To understand the picture clearly, Have a look at this security features table for both web hosts.

Do you know? Almost 30000 websites are hacked every day as per the study.

Not only this, but If you are a new blogger, you might also delete a file erroneously.

All this can be reversed if you have a last known good backup.

Now that we know how critical a backup is, let us understand the Backup related policy of both the hosts.

Hostinger mentioned its backup policy on its product page without any disclaimers.

Free Daily Backup is available with “Business”  and both entry-level plans like “Single” and “Premium” plans are offering Free Weekly Backup.

Daily backup is also available in entry-level plans but at extra cost. Weekly backup however is sufficient if the site is new. The backup copies created by Hostinger can be accessed from HPanel and can be restored easily without paying any extra charges.

So, it’s plain and simple here. We will now have a look at what HostGator has to offer.

HostGator’s backup policy is very confusing. We will not recommend relying upon the free automated backup service of HostGator due to our finding shared below.

We scrolled through their entire plan details and didn’t find anything about the backup. On its product feature page, you will not get any information regarding backups.

After spending a lot of time, we finally found this backup policy, some excerpts of which are as follows:

If you will check on their site, there is a field called “Level Up” which advocates the benefits of Daily Backups but takes you to a “CodeGuard” page which costs you an extra $2 per month.

Who is best if Daily Backup is your priority?

Automated backups are free and easy to access with Hostinger.

HostGator’s backup doesn’t sound user-friendly here as the company itself requests you not to rely on their backups.

HostGator stops automatic backup if the number of files or storage exceeds a certain limit. Moreover, for full backup restore, there is an extra fee of $25.

We will vote in favor of Hostinger as backup is available free of cost you can restore easily without any hassle.

If you are a beginner or a first-timer, you cannot afford sluggish customer service.

You might need the help any time during the day as a blog or website is an online business that is open 24×7.

Whenever there is a need, you should get an instant response and help round the clock.

Hostinger offers 24×7 chat support. There is also an option to continue the follow-up over email if instant closure is not possible.

The company’s chat team is really helpful and is available round the clock.

You may however experience a 15-20 minutes queue when you try reaching out to the chat support representative. That’s not common but worth mentioning here.

Once the chat is started, you will get your resolution quickly.

HostGator is also a great host when it comes to the resolution of its customer’s problems. HostGator offers 24×7 support over the phone and chat.

Who is best if Customer Service is your priority?

With personal experience using the customer service of both hosts, we will rate them equally good.

Both are available round the clock and provide a quick solution to your problem.

Knowledgebase of both companies is strong and the answer to half of the problems can be found there itself.

Which web host is easier to use? Which has a more robust cPanel? In this comparison section of HostGator vs Hostinger, we will address these queries.

Well, during the Hostinger review, we found Hostinger user interface (hPanel) is more beginner friendly, and feature-rich than HostGator. Here is why:

HostGator and Hostinger: Feedback & Reviews from Other Users

A single comparison isn’t enough to make a decision on Hostinger or HostGator. That’s why we should not skip what other users are saying about these web hosting services.

4.5 Rating out of 5 is a great number to quote and that too when you have 10,030+ participants. Trustpilot is a neutral platform and we can expect unbiased reviews there coming directly from actual customers.

Here are the results :

If you will see the stats above, you will find the scores on the negative side. 32% of customers rated 1 star to HostGator which should not be forgettable at any cost.

Read: Hostinger vs Bluehost: Which Hosting Is Better & Why?

Here are some of the frequently asked questions about HostGator and Hostinger.

Which one is better HostGator or Hostinger?

Both HostGator and Hostinger are reliable web hosts but for the sake of comparison, we will rate Hostinger ahead of HostGator. Both of them provide great customer service, uptime, speed but the if pricing and features are your priority, you should choose Hostinger.

How good is Hostinger?

Hostinger is one of the cheapest hosts that offers fantastic speed, uptime, and customer service. All Hostinger servers are located strategically in seven different geographies making it possible to reach your audience faster.

Is Hostinger safe and legit?

Hostinger is a 100% legit organization that caters to over 29 million customers. Its servers are firewall protected and monitored round the clock by the dedicated technical team. All websites hosted on its servers are scanned regularly for malware. The company also provides you with daily or weekly backup to help you reverse any unforeseen event.

Which one is better HostGator or GoDaddy?

What are the alternatives to HostGator and Hostinger?

Bluehost, Namecheap, SiteGround, and Kinsta are the popular web hosting companies you can consider as an alternative to HostGator and Hostinger.

What are the cons of Hostinger?

Lack of phone support and availability of free domain in a single web hosting plan are the only cons of Hostinger.

Who has more customers Hostinger and HostGator?

How to migrate to Hostinger?

What Others Are Reading:

HostGator vs Hostinger 2023: Which is the Ultimate Winner

Honestly, both Hostinger and HostGator are affordable web hosts that offer exceptional features.

HostGator is a great choice if you’re looking to host your site on a popular web hosting company (and it also offers great features).

If you’re looking for an affordable yet reliable hosting choice, go with Hostinger. Hostinger is also extremely cheap when compared to HostGator as its pricing starts only at $1.79/mo (with coupon BLACKFRIDAY).

So which web host are you going to choose? Have any questions? Let us know in the comments.

About Author
Anil Agarwal is a full-time blogger and SEO expert with over 17 years of experience. Here's the founder of HostingMonks.com and India's leading digital marketing blog BloggersPassion.com. Anil has been featured on major websites like Forbes, Semrush, Hostinger, Bluehost, CloudWays, Kinsta, WPX, DreamHost, etc.
Connect him on:

Hostinger vs BlueHost 2023 – Which Hosting Is Better & Why?

We are Featured on

I'm Anil Agarwal Founder of HostingMonks and BloggersPassion. HostingMonks.com can be considered as your ultimate one-stop guide for all of your web hosting related solutions. Read More...